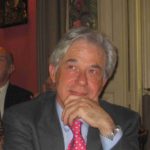 The IIF Board of Directors is pleased to announce Antonio Garcia-Ferrer, Professor of Econometrics at Universidad Autónoma de Madrid, with the title of IIF Fellow, as a distinguished researcher in the field of forecasting. At the International Symposium on Forecasting in June, Antonio was made a Fellow of the International Institute of Forecasters.

In most years, one or two IIF Fellows are elected, so it is a rare honour. Previous fellows have included the late Robert G Brown, Clive Granger and Arnold Zellner, and the very-much-alive Scott Armstrong, Frank Diebold, Robert Engle, Robert Fildes, David Hendry and Spyros Makridakis.

Antonio Garcia-Ferrer (2018) is Professor of Econometrics in the Departamento de Análisis Económico: Economía Cuantitativa at the Universidad Autónoma de Madrid, where he has been since 1980. He is Associate Editor of the International Journal of Forecasting since 1994 and Member of the Board (2001-2016) and President (2008-2012) of the International Institute of Forecasters. He was also the chairman of the 2006 and 2016 ISFs in Santander. His research interests include modeling and forecasting seasonal time series, turning point predictions and leading indicators. In these areas, he has published several books and more than 80 papers in international journals. In collaboration with other Spanish colleagues he has developed the UAM-UCM forecasting system of Spanish Economic Indicators.

Please join us in congratulating Antonio! Learn more about Antonio and his contributions to the field of forecasting.